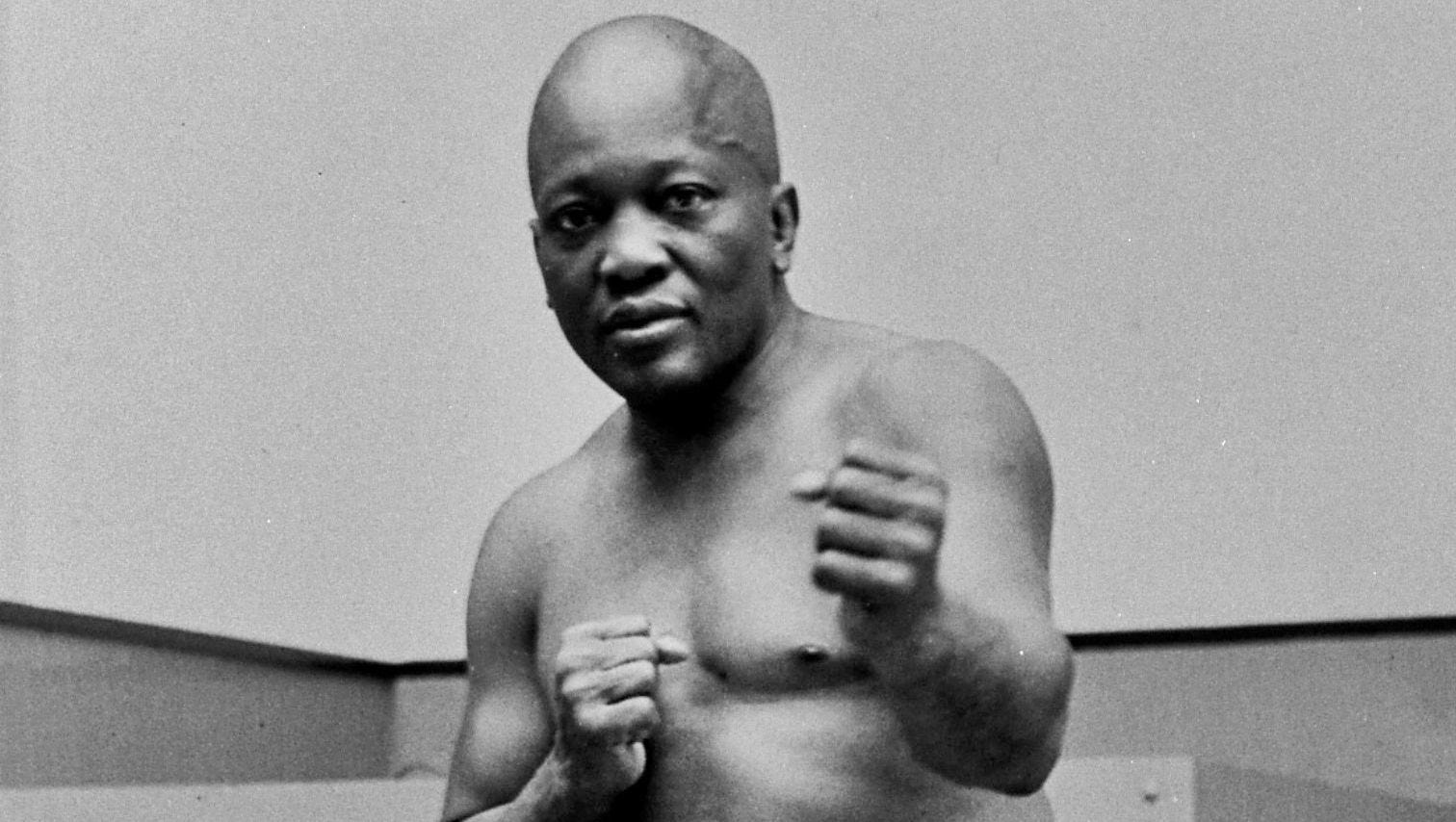 Think of some of the most influential African American figures in the fight for equality; odds are you thought of one of the following: Martin Luther King, Rosa Parks, Malcolm X, or Harriet Tubman. Perhaps maybe even John Lewis – may his soul rest in peace.

While there’s absolutely no disputing the impact the aforementioned icons had, personally, I think of two unique freedom fighters. No, real—literal fighters. Muhammad Ali and Jack Johnson.

Johnson was Muhammad Ali before Muhammad Ali. He was outspoken, brash, and “pretty.”
Before the money and the fame came poverty and shame. Born in Galveston, Texas, on March 31st, 1878, Johnson became Henry and Tina Johnson’s third child. He first got into boxing around the fifth grade after dropping out of school to pursue a job on the docks.

Johnson’s natural build and ability caught the eye of slave owners. He was picked to enter “battle royal” matches: a match so untraditional to boxing, it’s disgusting enough without racism. Battle royals were farmed in the Deep South and featured typically six slaves boxing until there was one man standing. However, the winner would get nothing out of victory, aside from maybe a pat on the back from their owner as they walked away pocketing the money.

Johnson dominated these matches, and soon quickly realized the true value of his skills. He decided to turn pro in 1897. After easily mowing through unworthy opponents and facing discrimination, Johnson finally acheived boxing glory. He became the Heavyweight Champion of the World after defeating “Denver” Ed Martin in a near 20-round war in 1902.

Soon after his victory against Martin, Johnson continuously called out and mocked current Heavyweight Champion of the World James J. Jeffries. However, every single time, Jeffries refused to give Johnson a title shot. He didn’t deserve it. The whole nation (aside from the black community of course), nearing the peak of the Jim Crow era, agreed. Johnson continued to sweep the floor when defending his colored title, but relentlessly mocked Jeffries for a title shot. However, in May of 1905, Jeffries retired, leaving undefeated, and vacated the belt. Many speculate he retired out of fear of facing Johnson in the ring.

Nine months later, the Canadian Tommy Burns defeated Marvin Hart to win the title. He celebrated, rightfully so, and traveled the world to face new opponents. He easily defended the title each time. However, he had one problem. The “loud-mouth” Jack Johnson refused to let the champ catch a break.

Everywhere Burns went, Johnson followed. He traveled the world with the sole purpose to embarrass and harass Burns to the point where fighting Johnson just to shut up him would be the better option.

On December 26th, 1908 in Sydney, Australia, Johnson was given the title shot. He manhandled Burns. He babied him. He dominated him. He owned him. Johnson would stop between rounds to smile and boast to the crowd, showing the champ no attention or respect. The police eventually had to stop the match, due to the growing animosity in the crowd, and Johnson was awarded a technical knockout, and he became the first African American to ever win the Heavyweight Championship of the World.

The search for the “Great White Hope” began instantly. The non-black community needed to regain “their” title from the undeserving hands of Jack Johnson.

Johnson steamrolled through the first few opponents, but another Jack would end up stabbing his fellow-name brethren. Jack London, a journalist, wrote,

“Jim Jeffries must now emerge from his Alfalfa farm and remove that golden smile from Jack Johnson’s face. Jeff, it’s up to you. The White Man must be rescued.”

Finally in 1910, Jeffries agreed to return to the ring, and vowed to “reclaim the heavyweight championship for the white race.”

The Jim Crow era was at its peak. However, Johnson acted like nothing was wrong. He publicly stunted flashy clothes, flamboyant cars, and openly-spoke about anything, and everything, he wanted to. The “worst” of his actions was to publicly flaunt and flirt with white women; which he did often. Johnson received a multitude of death threats, but he paid them no mind.

Tension was at indescribable high in Reno, Nevada on July 4th of 1910 when the seemingly untouchable “chosen-one” Jeffries stood opposite of Johnson; the black champion who metaphorically lived his life with a middle finger raised at any white man who passed. This fight was dubbed “The Fight of the Century”, and had an unprecedented story behind it. In fact, the President of the United States, William Taft, was asked to referee the fight – but he wisely declined. Rumors were circulating that there was a gunman in attendance, and if Jeffries didn’t finish Johnson, he would. Nevertheless, Johnson fought on.

Johnson toyed with Jeffries. He made him look like a child playing with the older kids on the playground. He did whatever he wanted with him. Jeffries, the previously undefeated champ, seemed like an Average Joe fighting Superman himself. Instead of the fight lasting 45 rounds, which is ridiculous they even scheduled that, it only lasted 15. Jeffries, who had never been knocked down in his career before, decided to quit after being knocked down twice.

How did the non-black community respond?

Funny how history repeats itself. Except, in this case, for different reasons. However, that’s a discussion for a later day.

More than 20 people were killed and over 100 were injured within a few days—almost all of them black.

So, why bring up Johnson’s story today?

Well, if you truly have to think about that question, I think you found your answer.

“For a black fighter in those days, just to climb in the ring – as the films show Jack Johnson doing, with crowds screaming for his ‘lynching’ – was a brave deed.” – Muhammad Ali “I know I’m bad, but he’s crazy” – Ali on Johnson “I’m black… They never let me forget it, I’m black alright… I’ll never let them forget it.” – Johnson