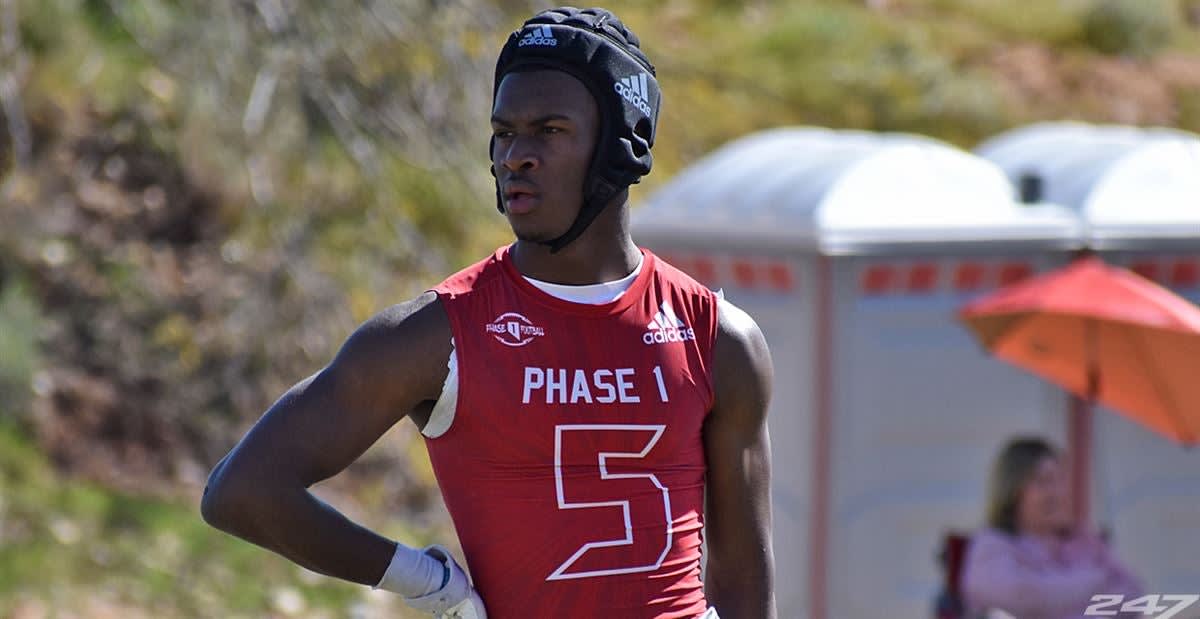 For three-star recruit, Darrien Stewart, a 6’2” 190-pound free safety from Desert Pines High School, Nevada, his dream is to one day be an NFL superstar.

Millions of kids around the nation dream of one day making it to the pros; finally becoming one of the best of the best at their craft. However, very few actually have that dream come to fruition. You see, it’s extremely difficult to make it to the professional level. Try to think of the situation as a piece of hard candy with a gum center. Now, as you lick away, you’ll eventually lick some jagged edges – obstacles in your path preventing you from getting to your destination in the middle.

What do you do? Do you stop licking to go clean up the red dye on your tongue? Or, do you keep going until you get that sweet, rewarding gum?

Are you a quitter?

Do you have what it takes to make it all the way?

Well, when I got the opportunity to have a chat with Stewart, I instantly could tell that he does indeed have what it takes to make it all the way.

If you could have any super power, what would it be, and why?

Darrien Stewart: Reading minds. Just so I know how people feel about me, and what they’re thinking about.

Q. If you could have dinner with anybody, alive or dead, who would it be, and why?

Great answers so far. Now, let’s get to the fun stuff.

Q. What’s the earliest memory of football you have?

DS: When I was little I would go to my older brother’s football games. I loved to watch him play. I always wanted to be just like him. Once I got older I started playing football because of him.

Q. Throughout your career, who has been your biggest inspiration?

DS: My biggest inspiration has probably been my mom. My oldest brother went through a lot, and he got hurt in college, so she helped him. I always wanted to go to college and be on the big stage. I have been trying to make it to the next level, and my mom has always been there for me and my brother, she does everything for us, so I just want to provide for her one day.

Q. I would assume then, that she’s been your biggest supporter as well, correct?

Q. This one’s a bit harder of a question, and you may have to think a bit more, but tell me – why do you love football so much?

Q. What does football teach somebody?

Q. Why a safety? What does it mean to you to be a safety?

DS: To me, it’s the quarterback of the defense. You have to know all the assignments on defense, guide your teammates on their job, and participate in extensive film watching. You have to be the most vocal person on the defense communicating with others.

Q. Why you? What makes you different from everybody else?

DS: I work hard all the time. I’m always working. I work out two to three times a day. Also, I have good length. I’m a tall and lengthy player who takes advantage of the size difference. I’m constantly watching film. Also, my athletic ability sets me apart from everyone else.

Q. Could you describe any struggles you’ve had to overcome so far?

DS: The power turns off for weeks at some points. My mom’s trying to figure that out. Sometimes, we’ll go a long time without having food in our refrigerator. That’s why we play the game, because one day you want to be in that spot where you don’t have to worry about that anymore.

Q. Now, let’s pretend [I put on an imaginary Crimson Tide hat] I’m the University of Alabama’s head coach. What would you say to me in order to convince me to give you a scholarship?

DS: If you give me a scholarship, I’ll come in and work hard every day—especially outside of football. In the classroom I’ll work just as hard. Nobody will outwork me.

Q. Now, I’m sure you’ve ran into your fair share of, and if not you likely will in the future, but, if you could speak to all of your doubters, what would you say to them?

Q. What are you most excited about for the future?

DS: Making history at my college. I will give my all when I’m there. After that, I want to go to the next level.

Q. If you could play for any NFL team, which would it be?

DS:[Laughs] Either the (Baltimore) Ravens or the (Las Vegas) Raiders. I’m a big Ravens fan, and as for the Raiders, it would be cool to play in my hometown.

While speaking to Stewart, there was a certain calm, almost soothing factor when he spoke. The way in which he carries himself is like no other. In an almost Stephon Gilmore-fashion, he is a true silent worker.

He’s the type of guy you can count on to be the first one there and the last one out; without a single negative thought muttered. The way in which the pitch of his voice and the deliberate slowness in his cadence, when speaking about his family, it truly showed how much he cares about them.

Stewart is selfless. Somebody who will put the team’s needs ahead of his own. Somebody whom coaches will almost certainly beg to leave the weight room. Somebody who leaves his opponents uneasy, but will never forget sportsmanship.

Darrien Stewart is currently ranked as a three-star recruit by both rivals.com and 247sports.com. According to maxpreps.com, Stewart is ranked as the third best player in the state of Nevada. He has received offers from the following institutions: UCLA, Boise State, Colorado State, Fresno State, Hawaii, Nevada, Northern Colorado, San Diego State, UNLV, Utah State, Washington State,and West Virginia.