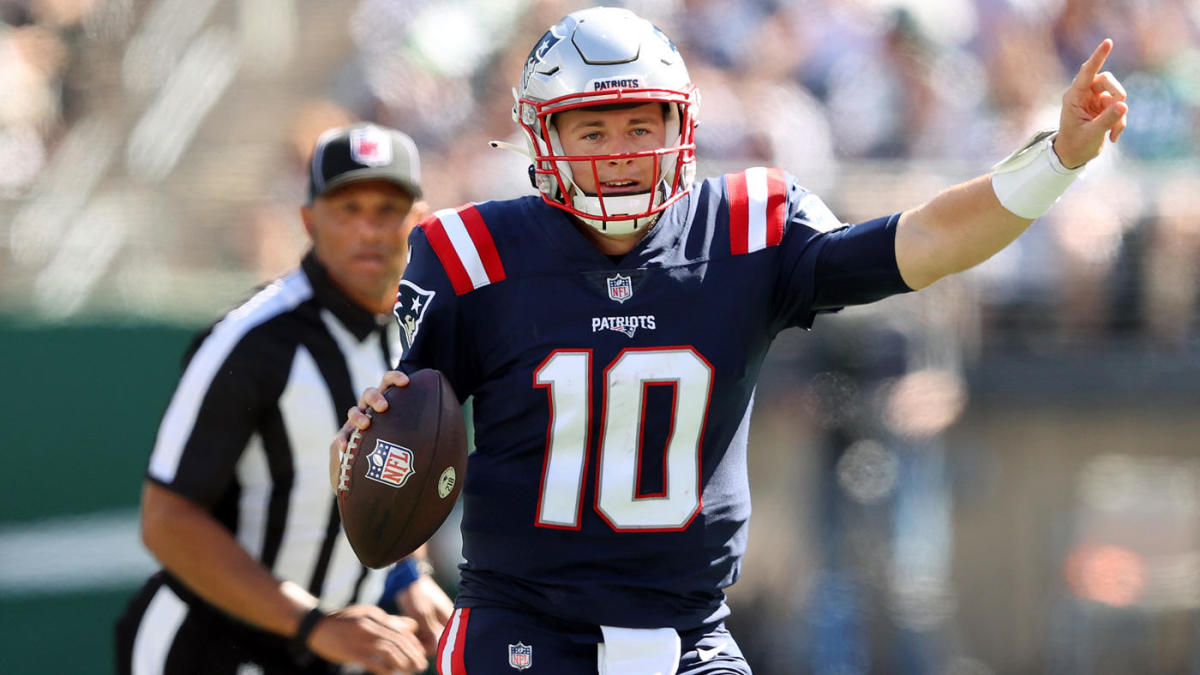 OTTNO: Week 10 – Can You Smell What The Mac Is Cooking?

Welcome to On To The Next One, the weekly column where I select four players you should consider benching/starting this week. There will be two categories here: “The Rebounders” and “The Fumblers.” The Rebounders are two players that had a disappointing fantasy performance last week, but will rebound this upcoming week to produce better numbers. The Fumblers are two players that had fantastic performances last week, but they will not put up nearly the same amount of points on the board this upcoming week, and will fumble away the fantasy football glory they fleetingly had.

Last year, I ran the same formula and saw a success rate of almost 70 percent; success being defined as a player doing 50 percent better or worse the next week. If you have any of these players – PAY ATTENTION.

Mac Jones, QB, New England Patriots
5.96 points (PPR) / 5.96 points (Non-PPR)
The New England Patriots are on a three-game winning streak as the offense looks drastically different from last year. Though they still run the ball extremely well, Mac Jones has been able to make the passing offense semi-respectable. Through Week 9, Mac has 10 passing touchdowns, which is already two more than Cam Newton had all of last season with the Patriots. While Mac lacks Cam’s rushing ability, he does have the ability to push the ball when need be. Offensive coordinator Josh McDaniels has largely kept the safety belt on Jones this season (to the frustration of many), but Mac has flashed moments showing he’s capable of performing at a high level when need be.

A moment like that may come this upcoming week against a solid Cleveland Browns team. The Patriots defense struggle against stout rushing offenses, and Cleveland is just that. Though they will possibly be missing Nick Chubb, the Browns will most likely get Kareem Hunt back from injury and will still sport D’Ernest Johnson, who has proven to be a solid runner. If the Patriots defense is unable to contain the Browns from running all over them, Mac will have to pick up the slack, especially if both Damien Harris and Rhamondre Stevenson are out/limited.

Zack Moss, RB, Buffalo Bills
4.4 points (PPR) / 2.4 points (Non-PPR)
We can keep this one semi-short and sweet. The Buffalo Bills are going to be heading to MetLife Stadium to play a New York Jets defense that has allowed 149.67 rushing yards per game over the last three games; the latter of which saw them give up 172 yards and two touchdowns to one player. Being the goal-line back, Zack Moss will likely get plenty of chances to push the ball into the end zone, if not outright run the ball in himself from distance. It’s worth noting that Moss is still in the NFL’s concussion protocol, so if he does miss this game, expect Devin Singletary to have the big game.

James Conner, RB, Arizona Cardinals
40.3 points (PPR) / 35.3 points (Non-PPR)
James Conner put up a ridiculous performance last week, rushing for 96 yards and two scores while hauling in all five targets for 77 yards and a touchdown. With all of that accumulating to about 40 fantasy points, Conner just had the third best game for a running back all season in fantasy thus far. The other two performances?

Although Conner is currently tied for the most rushing touchdowns in the NFL with Derrick Henry, this performance was a hilarious outlier. He’s put up 20 FP only one other time all season (20.6 vs. LAR, Wk. 4) and has caught five catches total in the other eight games. While having Chase Edmonds go down with an ankle injury will help Conner’s stock, relying on him for RB1 numbers has yet to be proven as feasible.

That’s especially true when considering the “too many mouths to feed” dilemma that comes with being on a talented and deep offensive roster; especially if the quarterback is a legitimate rushing threat too. I’m just skeptical to hop on the Conner train until he proves to be a solid dual-threat running back on this offense consistently, though he may struggle this week against a Carolina Panthers defense that allows the fourth fewest FPPG to RBs (18.97). Time will tell — I just don’t think the explosion comes this week, though having Brian Burnsout would help. This situation with Conner is perhaps the most intriguing in fantasy right now.

Racking in seven catches for 84 yards and two touchdowns last week, Moore was a main factor in a late-game surge for the Jets who ended up losing 45-30 against the Indianapolis Colts. However, a large reason as to why Moore was able to see so much volume was the fact that New York’s leading receiver, Corey Davis, was out due to injury. Davis has been practicing at nearly full capacity, so he’s expected to be ready to go this week against the Bills. Though the Bills defense is immensely good this year (they’re the best D/ST in fantasy thus far), the Jets will be down most of the game, which will force them to throw. We saw that happen last week against the Colts, though this time Davis will be around which will cause a decline this week for Moore.